Connect > Blog > The Importance of Belonging

The Importance of Belonging

At TLG, we know how important it is to belong. For the children and young people we support, particularly those who are looked after in the care system, it can be hard to know where you fit in. We asked Krish Kandiah, founder and director of the fostering and adoption charity Home for Good, to share his thoughts on why we all need somewhere to belong.

"A lone young soldier stares into the distance. The rain is pelting down around him. He looks shell shocked. Who knows what horrors he has seen. An older soldier sits next to him and pours him a cup of coffee from a thermos flask. The camera pans back and the young man is pretty soon surrounded by his squad. The coffee seems to do him some good. The older man gives him an affectionate nudge and messes with his hair and the manages to get a smile out of the lad. The caption appears “This is Belonging” and the logo “Army: Be the Best” appears on the screen.

It seems the British Army knows that we were built for belonging. In a difficult and divided world, community is an essential part of human dignity. On their recruitment website they explain: "A sense of belonging may sound like a small thing. Yet it fuels you as much as food and water, because it doesn't just feed your body, it feeds your mind and soul."

This is perhaps not the image you might expect. The advertisers could have promoted other soldierly attributes: courage, bravado, grit, strength, or resolve. But instead the Army have latched on to what is arguably the most important human need. For many people the army is a place not only where they fight for the country they belong to, but where they find a community to belong to.

One of my sporting heroes Kris Akabussi spent most of his childhood in care and once described to me how he had longed to be adopted and be part of a family. But every time potential adopters came to the care home he and his brother lived in, despite their shiniest shoes, smartest clothes and biggest smiles they were always overlooked. It wasn't until he joined the army that he found a sense of belonging. One of his officers noticed that he was fast and so encouraged him in athletics. He acted like a father to the young Kris and made a huge impact on him. Despite huge success winning gold medals for his country and becoming a media celebrity, Kris still thinks back and wonders what difference having a family would have made on him. He thinks he would have made someone a good son - and I agree.

We were born to belong and, for most of us, our first and best experience of this is within the safety of a family that loves us unconditionally and within a community who accepts us willingly. For those children who do not have this because they are in care, I feel a calling to help them find new stable and loving families through foster care or adoption. I have had the privilege of seeing hundreds of people step forward to offer children the belonging they are currently missing.

One of the wonderful things for me is seeing how the church has been such a help in that process. I have seen churches wrap around foster and adoptive families giving them the support they need as they love and encourage children who have had the hardest starts to their lives. I have seen how churches have become an extended family to children in care – with church members becoming foster aunties and uncles to children who benefit hugely from their acceptance. The kind word of welcome, the offer of help to parents, the inclusion of looked after children in invitations to birthday parties and outings, the words of encouragement rather than tuts of disapproval when the child struggles with a new environment have all been wonderful ways we have witnessed the church helping children know and feel that they belong.

When looked after children have been excluded from Sunday school, their needs misunderstood or ignored in the children’s programme, when they have found little or no sympathy or understanding of their circumstances, it is surely a travesty. The church is commissioned to offer these children a different sort of community. God is described in Psalm 68 as “a father to the fatherless, a defender of widows is God in his holy dwelling. God sets the lonely in families."

I have been impressed hearing about TLG’s work with children who don’t feel that they belong anymore in mainstream school, and how their church partnerships offer alternative school provision and coaching programmes where they can find some sense of belonging. These are fantastic building blocks for churches and individual Christians to get a heart to show God's fatherly care for those children who desperately need a place to belong. A sense of belonging may sound like a small thing - but, as the Army rightly says, “it doesn’t just feed your body, it feeds your mind and soul.” 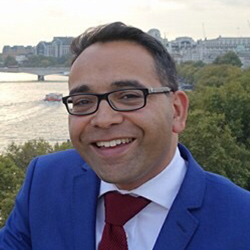 Dr Krish Kandiah is Founder and Director of the adoption and fostering charity Home for Good, and vice president of Tearfund. He is in demand as a speaker, consultant and social entrepreneur. Krish lives with his wife and seven children, including fostered and adopted children, in Oxfordshire.