Connect > Blog > Am I adopted?

‘How can a creepy show like The Moomins be on children’s TV?’

Growing up in the 1980s, that was one of two questions constantly on my mind. The other question was 'am I adopted?'

Ok, you may not have asked yourself about the Moomins, but wondering if you are adopted has to be one of those things that’s crossed everyone’s mind at some point in their life.

When I was 13 my dad passed away and it hit home that if anything were to happen to my mum, adoption could become a reality for me. It also made me realise that not only was I blessed with a strong family unit but I was part of a church where someone was always looking out for me. At the time, I thought my church was full of weirdos and life’s rich tapestry was there in full colour but, like family, they were my weirdos and the reality is that none of us are ‘normal’ – not even you or me.

There was Edith with her speaking clock in a carrier bag that would go off at the same time every week, Harry who had no concept of personal space, and the ‘hanky man’ who danced and waved his handkerchief during worship times – the unique blend of humanity that’s in every church in one way or another (if you can’t think of anyone odd, then you’re probably that person!).

But each of them looked out for me and expressed the kind of genuine love that the Bible talks about in a way that changed my life. They all took time to ask how I was, encourage me or simply talk to me when it wasn’t comfortable for them to do so. That is what kept me in my faith. Not theology, not judgement, not the Sunday service, but being shown a love that is talked about in 1 Corinthians 13 – a love that adopts.

Adoption is a big commitment that not all of us are cut out for, but we can all play our part. Whether that’s taking a neighbour under our wing, helping someone who is homeless, visiting someone who is lonely, speaking to a young person at church or coaching a child struggling at school. Imagine the impact it would have on someone who has no support around them.

That is the kind of adopting we can all do.

Adoption is a central concept in the Christian faith. The Bible says we've been adopted into God's family and taken under his wing. With that in mind, how could you extend that generosity to others who may lack family, friends, role models or guidance?

It's easy to live in a silo and expect that there's nothing to learn from people who are older or younger than us. Be challenged today to make friends with someone from another generation. You might babysit for your neighbour or for a family at church; you might offer to look after or regularly visit an elderly person to give their loved ones some respite from carer duties. Perhaps you've wanted to become a mentor for a while, but never got around to signing up. Maybe adoption or fostering is something you've felt called to for a while, but you've felt apprehensive about taking the first steps.

Well, make those moves today. Let today become the catalyst for something that changes both your life and the lives you touch.

This post was orginally published as part of Stewardship's 40acts Challenge: www.40acts.org.uk 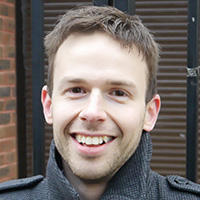 Paul is Head of Fundraising and Impact at TLG and joined the charity back in 2005. Alongside his role at TLG, Paul once finished 5th on The Weakest Link. He is also on the trustee board for e:merge, a young people’s charity that has delivered youth work for nearly 20 years in South Yorkshire and South West London. Paul is married to Louise and has 2 young children, with another on the way!